The Thirteenth House
by Sharon Shinn 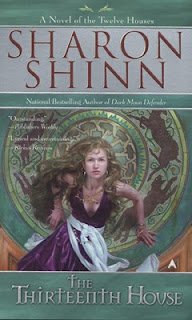 Genre: Fantasy/ Romance
Ages: 15 and up
Sequel to Mystic and Rider
The band of adventurers that traveled the land in Mystic and Rider have been split. Senneth and Tayse are in Brassenthwaite attempting a reconciliation with Senneth's brothers, while Kirra, Donnal, Justin and Cammon are on a mission to rescue the kidnapped regent-to-be Romar. However, it is not long before they are reunited. Senneth, Tayse, Justin and Cammon have been assigned to protect the Princess Amalie as she tours the country in an effort to quiet the disturbing rumors that abound about her. Kirra, followed as always by Donnal, is also touring the land disguised as her sister Casserah, who has been named heiress to Danalustrous but refuses to leave home in order to meet people. Of course, nothing is more natural for Kirra than to join her friends. Before long they learn just how necessary they are if Amalie is to be safe...
This is my least favorite novel in an otherwise wonderful series. I liked the plot and characters, but I really did not like the romance. Love triangles annoy me, and I hate adultery. This story focuses on frivolous, vibrant, selfish Kirra and her affair with the married Romar. Despite all of her friend's warnings, she insists on doing what she wants when she wants, regardless of who she will hurt. I like Kirra, but sometimes she makes me mad.

The language is about the same level as Mystic and Rider, maybe slightly less, so I give it a 4.10.

There are some mild sexual references and innuendos as well as a few fade-away scenes between an adulterous couple, so it gets a 5.10.

There are several scenes of violence, none that are overly graphic, so I rate it a 5.10.