Mystic and Rider
by Sharon Shinn 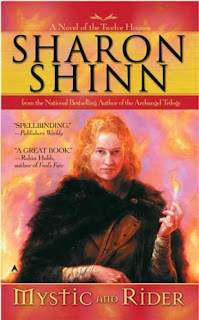 Genre: Fantasy
Ages: 14 and up

This is one of my favorite fantasy novels by one of my favorite fantasy authors. I love the characters with all of their many differences and complex loyalties. The romance in this book is magnificent, not the usual sort where the two characters start out hating each other or where they have instantaneous chemistry, but rather the kind that slowly slips through their guards before they can do anything to prevent it.

Mystic and Rider takes place in a land where mystics (people with magical abilities) are feared and persecuted by the larger part of the populous. The king, however, accepts and supports them. Indeed, he trusts one mystic enough to send her and a party of mystics accompanied by two of the elite King's Riders to investigate disturbing rumors of rebellion against the crown. Senneth, a mysterious woman with extraordinarily powerful abilities, leads their expedition, followed by the lovely, aristocratic Kirra and the faithful Donnal (both shape-shifters) as well as the Riders, stubborn, solid Tayse and young, cynical Justin. Along the way, they pick up a boy named Cammon who has eerie mind-reading talents. This unlikely group sets out divided, the Riders not quite able to trust the mystics, but they slowly form bonds of respect and even affection as they face dangers and difficulties of every kind, from a marauding wildcat to a fanatical priestess who is determined to rid the land of all mystics.
This book is the first in a series of five novels, all of which are highly entertaining, especially the third one. :)

I give this book a 4.10 in profanity, for multiple uses of the term for an illegitimate person and a couple instances of mild swearing.

This book gets a 7.10 in violence for several skirmishes with enemy soldiers. The characters also discover the bodies of murdered families and there are references to the murder of an infant who was killed many years ago.

There is some mild innuendo and  a few references, so I rate it a 3.10 in sexuality.