First I must give a huge thank you to the lovely people at The Experience Tours for introducing my to this wonderful series! I love meeting evil authors. :) 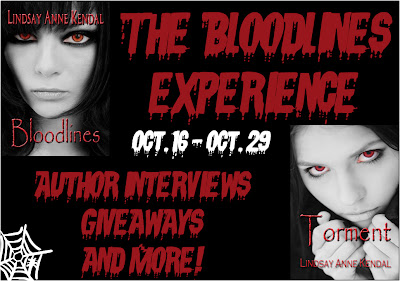 As part of this tour, I am reviewing both books, Bloodlines and Torment, together. I hope that after reading my reviews you will decide to read these books for yourself. :) 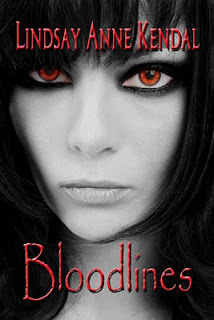 Bloodlines
by Lindsey Anne Kendal
Genre: Urban Fantasy
Ages: 15 and up
I received an e-copy of this novel as part of a blog tour in exchange for a fair and honest review.
Description:﻿
Keira Jameson used to lead a normal life, she just had a gift, passed down through the generations of her family. Now, after hearing voices, having strange dreams of others calling out to her, and her grandfather's last words haunting her, she sets out to find other families like hers. Along with her best friend Lily, the only person outside her family to know about her gift, Keira begins a hunt for her ancestors. A chance meeting with a young man, Lucian Turner, sets them on the right track, but their discoveries change the way Keira will see herself for ever more. Fear, superstition and heritage are shaping Keira's future and she must face her enemies, even if this could mean losing her life. She cannot escape her destiny. Part Buffy-style horror, part tender romance, Bloodlines will have fans of the genre on tenterhooks waiting for the next instalment of this gripping and hell-raising tale. Book 1 of the Bloodlines trilogy.
My Thoughts:
I was a little slow getting into this book, but once I had read a few chapters I was caught by the mystery, the magic and, most especially, the characters. Keira is a prickly individual with quite a temper; it is rather entertaining to watch her flinging attackers left and right and into trees. Her best friend Lily, while not nearly as tough, is also no shrinking violet. She is unfailingly loyal and sweet. The contrast and friendship between them is very well done.
As much as I liked watching Keira toss people around, the real fun started when she actually talked to them. Four of them were male, young and handsome. I could immediately see the potential for a good love triangle. Jake and Lily hit it off right away, which left the leader, Lucian, the joker, Tyler, and the one she started out hating, Danny. Since I liked them all (though Danny took some warming up to) I could tell this was going to be good. The interactions between the two new girls in town and the four boys that were as close as brothers was way to much fun to watch. I found myself enjoying the teasing more than the romance.
I thought that the historical aspect of the story was interesting, with the guys and Keira descendants of five people involved in the Salem witchcraft trials. It added a nice depth to the tale.
The twists and turns in this book lead to fights and mysterious visitations and culminate in a shocking attack and an ending that truly earns Ms. Kendal a place on my list of Evil Authors who write cliffhangers designed to leave you begging for more....oh yes, I liked this book. You should read it for yourself. :) 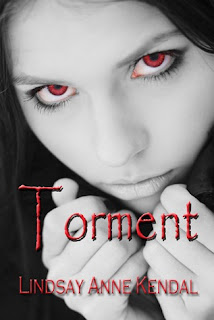 Torment
by Lindsey Anne Kendal
Genre: Urban Fantasy
Ages: 16 and up
Sequel to Bloodlines
I received an e-copy of this novel as part of a blog tour in exchange for a fair and honest review.
Description:
Keira has been through Hell, literally..... But now she’s back, and stronger than ever!
In this second gripping instalment of the Bloodlines trilogy Keira and her friends – Lily, Lucian, Tyler, Jake and Danny – continue to try and understand their elemental powers, and protect themselves from their enemies, whose ultimate goal is to destroy them. This time, the stakes are higher – what seems to be a demon rebellion has broken out in hell and the Earth is plunged into chaos. Their problem is, no one – not even Lucifer himself – knows who the rebel leader is. It seems only Keira, her frightened but determined friends, and a new ally – a demon named Eligos - can find out who this person or thing is, why they are suddenly causing so much bloodshed, pain and upset for everyone, and destroy them. Bloody awesome battles, amazing feats of magic, and a stronger-than-death passion, make for an intoxicating, unforgettable read in this powerfully imagined fantasy. Book 2 in the Bloodlines trilogy.
My Thoughts:
After the end of Bloodlines, I had so many questions when starting this book. It is a little darker, a little more violent, and much more romantic. When Keira comes back from Hell things become very complicated. Especially when she doesn't come back alone.
Eligos, a character met only briefly in the first novel, comes to the forefront in this one, which causes all kinds of jealousy in the young man who has fallen in love with Keira. (And no, I am not telling you which young man that is. That would spoil the first book.) Eligos and Keira have wonderful chemistry. They argue and make up all the time because they are both so stubborn. Eligos, despite his crazy fighting and magic skills, is also very vulnerable. He has a secret that he fears will stop Keira from loving him.
The level of magic and adventure in this book is much higher than the first. Their powers gain strength (due to a bit of help) and even more enemies are after them. Keira has mom troubles (with both of her mothers), Lily gets to join the fun and a few more girls (some more supernatural than others) come into town. The only thing I disliked about this book is that the next one isn't out yet.
Content Ratings: Profanity, Sexuality and Violence
1 (mild) through 10 (extreme).
Profanity:
I give it a 5.10 for mostly mid-level swearing as well as a couple of instances where the characters used half of the f-word.
Sexuality:
I rate it a 4.10 for a couple of fadeaways in the second book as well as vague references to a rape.
Violence:
I rate it a 7.10 for torture, death and some brutality.
You can see the full list of tour stops here to read more reviews and guest posts. Tomorrow there is a guest post and a giveaway over at After the Book... I hope to see you there!
Lieder Madchen
Posted by Unknown at 1:01 AM