Today I am very excited to have Bonnie Erina Wheeler visiting as part of the blog tour for her wonderful YA novel, Fate Fixed. Thank you to the Bookish Snob for arranging the tour and to Ms. Wheeler for stopping by and answering my questions. :)
Could you tell us a little bit about yourself and your book?
Hello Songs and Stories. Thank you so much for having me.
I am a full time college senior at the and a wife and mom. My novel is a young adult paranormal romance and it is the first in a planned 5 part series. It is the kind of story that is a quick read with a bit of a mystery, a hunky guy(s) and most definitely a fated love. It is my first novel and I wrote it in May and June of this year.
Where did you get your inspiration for Fate Fixed?
My daughter and I have a shared love of reading paranormal young adult novels. In 2010, she became severely ill and almost passed away. For months, she was in the hospital and I stayed with her the majority of the time. At the beginning of 2011, she had to have a serious surgery that would require a long stay. She couldn’t stand any noise from TV’s or music, even talking on the phone, so in the silence, I had a lot of time to think. I wanted to do something for her, so I began to write her a novel. She had always told me I should write because I had mentioned many times I would like to, so it seemed like a good time to start. I decided to write a novel for her that she would love. The majority of Fate Fixed was created at her side while she slept. Once home, it took me about eight more weeks to finish it and when she read it, she begged me to publish it. Author, Elizabeth Lorraine was writing on Facebook a lot about her writing and she inspired me to try. When I mentioned to her on a post that I wanted to do it someday, she told me I absolutely could. I don’t think she realized at that moment that she had given me the “okay” I didn’t realize I was waiting for. I am thankful for her encouragement.
What made you choose to mix Irish, Norse and Balkan folklore and terminology?
In my future novels, I will be going into the backgrounds of these and some of the odd parings will be explained – but, when I originally decided to write about these fascinating creatures, I loved learning that each culture has its own beliefs. I wanted to create a fictional world that had a history of these beings, but I didn’t want to stick to just one area. I love the magic of the little world I built.
In Fate Fixed, your characters listened to 30 Seconds to Mars, Chris Isaak and Duran Duran. Does this reflect your taste in music or not? What are some of your favorite songs?
I am a huge 30 Seconds to Mars fan. I listened to their albums constantly while writing. In fact, Lexie’s reference to Jared Leto and Jordan Catalano were based on the lead singer of the band who she had an innocent crush on for years.  I selected the Duran Duran song, because I thought it would be just like Alik to be singing along with a song like “Hungry Like A Wolf.” After all, he finds himself hugely entertaining. The classic song by Chris Isaak is always good, but I prefer the rockier remakes that have been done, like the one by HIM.  I listened to “Down” by Jason Walker and “Cut” by Plumb when I wanted to write sadder moments in the novel. I love “Think Twice” by Eve6 and listened to them while writing scenes with Maxim. When I wrote through Torin’s eyes, it was anything by 30 Seconds to Mars and sometimes . J
If you could spend an afternoon with one of your characters, which one would it be and what would you be doing?
I would spend the day hanging out with Theo at Big Wally’s. Hopefully the coven would stop by and I could joke around with Torin’s cousins and get them to bring me dirt biking or to the party in the woods.
What are you reading at the moment? Are there any books that you re-read over and over again?
I am presently reading Elita Daniel’s “The Guardian” – a wonderful vampire book! As far as books that I have read more than once, the Sookie Stackhouse novels are a quick read and since I am a fulltime college senior, I enjoy their ease.
Random Questions:
If you could go anywhere for a week, where would it be?
I vacation to so I could see my friend Leah!
Chocolate or vanilla? Chocolate J
Dogs or cats? Both
Thank you so much for coming! I am looking forward to the next Erris Coven novel. :) 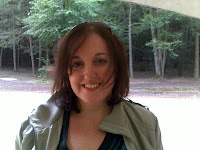 About the Author:
Bonnie Wheeler lives in Torrington, Connecticut with her husband and three children.  When she isn’t writing or spending time with her family, she is attending classes at the University of Connecticut.  Bonnie loves cooking, writing, reading, and shopping.  Fate Fixed was released in July and is the first novel in The Erris Coven Series.  She is hoping to release the sequel later this Fall.

About the Book:
When Lexie Anderson’s mother suddenly announces she is marrying a Romanian immigrant, Lexie willingly leaves behind her busy life in Connecticut for her penance in “The Moose Capital of the World.” Small town living is strange enough, now Lexie must cope with her overbearing stepfamily monitoring her every move. They disappear into the woods at night and keep a strange secret locked in their shed. Her once calm mother is now having violent outbursts and Lexie’s little sister is hearing sinister sounds coming from the forest behind their new home. Lexie’s biggest surprise comes when she discovers the boy she has been dreaming about since her accident is living in Maine. Despite Torin’s questionable reputation, Lexie cannot resist the physical and emotional attraction pulsating between them. Animals and people in town are turning up dead and Lexie learns the strange new world she lives in has real life monsters. Just when she decides she wants to be with Torin forever, she must fight to protect her mother and sister from being harmed by a formidable evil.

I have one e-copy of Fate Fixed to give away to one lucky commenter. All you have to do to enter is leave a meaningful comment with your e-mail address. For one extra entry, spread the word and leave a link. Following is not required but it makes me smile.  :)

Follow the tour for more interviews and giveaways as well as guest posts and reviews. At the end of the tour there will be a huge giveaway with three e-copies and one signed copy of Fate Fixed. The next post is tomorrow at Hands and Home. Have fun and good luck!

Lieder Madchen
Posted by Unknown at 1:00 AM