Hello! Today I am happy to participate in the blog tour for Carry on the Flame by Jodine Turner, hosted by The Bookish Snob Promotions. This novel is a fascinating mixture of modern fantasy and Celtic mythology, and I get to share an excerpt with you! 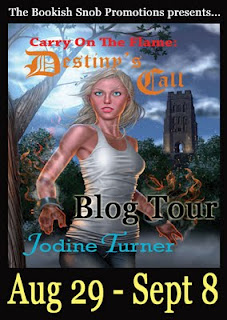 Follow the rest of the tour for reviews, interviews and giveaways! The next post is tomorrow at Coma Calm's Corner.

To purchase a copy of this book, you can find it on Amazon.
Posted by Unknown at 12:05 AM