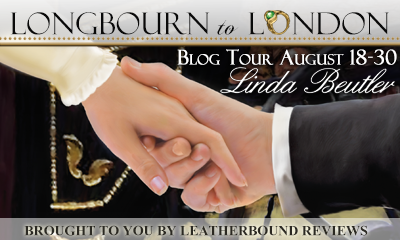 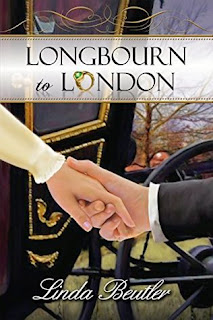 Longbourn to London
by Linda Beatler

I received a copy of this book as part of a blog tour in exchange for a fair and honest review. Thank you to Jakki of Leatherbound Reviews for hosting the tour!

A courtship is a journey of discovery… …but what do we know of the official betrothal of Fitzwilliam Darcy and Elizabeth Bennet? We may assume there were awkward social events to navigate, tedious wedding arrangements to negotiate, and Bingley’s toplofty sisters to accommodate. How did Darcy and Elizabeth manage these travails, and each other? Longbourn to London is not a Pride and Prejudice “what if,” nor is it a sequel. Rather, it is an expansion of the betrothal of Jane Austen’s favorite couple. We follow Lizzy’s journey from spirited maiden scampering about the fields of Hertfordshire to nervous, blushing bride in Mayfair, where she learns the unexpected joys of marriage to a man as willing to be teased as she is to tease him.

This is a sweet and sensual sequel Pride and Prejudice, interspersed with moments of delightful mischief. If you are looking for a relaxing romance to give you the warm-and-fuzzies, this is it.

Speaking of relaxed, it was lovely to see a carefree and playful Darcy. His lady has agreed to marry him, Wickham is safely out of the way and he hasn't a care in the world. Well, at least not until Mrs. Philips and Mrs. Bennet start stirring up trouble. Then he becomes more of a nervous and worried Darcy, which was also oddly adorable.

This book has an interesting take on Elizabeth, some of which I cannot say here due to spoilers. Most of the story centered around her feelings and fears as her wedding day approached. There was an interesting transition as she moved from being her parents' daughter to Darcy's wife.

Mr. Bennet played the largest role of any of the side characters as he was called upon to thwart his wife's trouble-making. It was nice to see him put his foot down when Mrs. Bennet was at her worst. Caroline made a melodramatic appearance and Colonel Fitzwilliam was strangely...creepy. I was a little disappointed when that didn't lead to anything. Mrs. Gardiner was, of course, absolutely magnificent.

I liked this book a lot, but I do wish there was a little more conflict, mostly 'cause I'm an evil reader who likes to see my favorite characters suffer. Everything was a little too peaceful for this to be one of my favorites, but other than that I have no complaints. The writing was lovely, the characters true to themselves yet not wholly traditional, and the story was a great deal of fun.

Sexuality:
I give it a 7.10 for a few descriptive scenes near the end and references and innuendos throughout.

Violence:
There was no violence in this book. 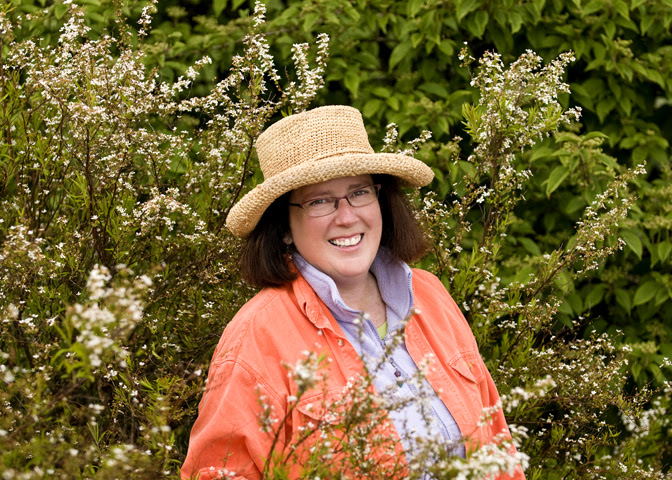 Linda Beutler is an Oregon native who began writing professionally in 1996 (meaning that is when they started paying her...), in the field of garden writing. First published in magazines, Linda graduated to book authorship in 2004 with the publication of Gardening With Clematis (2004, Timber Press). In 2007 Timber Press presented her second title, Garden to Vase, a partnership with garden photographer Allan Mandell. Now in 2013 Linda is working with Meryton Press.

Linda shares a small garden in Southeast Portland with her husband, and pets that function as surrogate children. Her personal collection of clematis numbers something around 230 taxa. These are also surrogate children, and just as badly behaved.

You can buy Longbourn to London at:

Happy Reading!
Lieder Madchen
Posted by Unknown at 12:45 AM