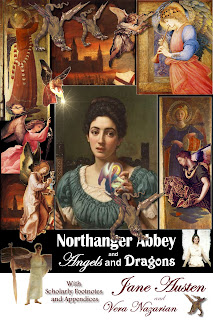 Jane Austen purists beware! That great lady's masterworks have been snatched by that shameless harridan Vera Nazarian and dropped into absurd and wholly improper situations. The unfortunate heroine of Northanger Abbey has been placed in a strange world of angels, demons and one monstrous duck! Will Catherine Morland be able to resist the demonic wiles of the Thorpes with only the help of her angelic friends? Is the dragon that has been seen in the skies above Bath seeking a buried treasure? Are there codes hidden in horrid novels?
This novel is absolutely hilarious. The illustrations, footnotes and appendices (not to mention the story itself) will keep you chortling in helpless disbelief from start to finish. Catherine Morland's legendary fevered imagination has even more food for its fantasies, leading to the wildest of accusations being thrown about. The almost handsome Henry Tilney is an admirably sensible anchor in this otherwise ridiculous story, and their romance is quite lovely.
I was fortunate enough to win a copy of this novel that was not only signed, but doodled as well! The next novel in this series, Pride and Platypus, is coming soon and I can hardly wait to read it. :)

This book just barely rates a 4.10 for language. There is an impolite term for a certain type of female used multiple times, but not in an offensive manner.

I rate this book a 2.0 for some very mild references and innuendos.

There is a brief scene of mild violence in this book, so I give it a 1.10.

Lieder Madchen
Posted by Unknown at 10:11 AM